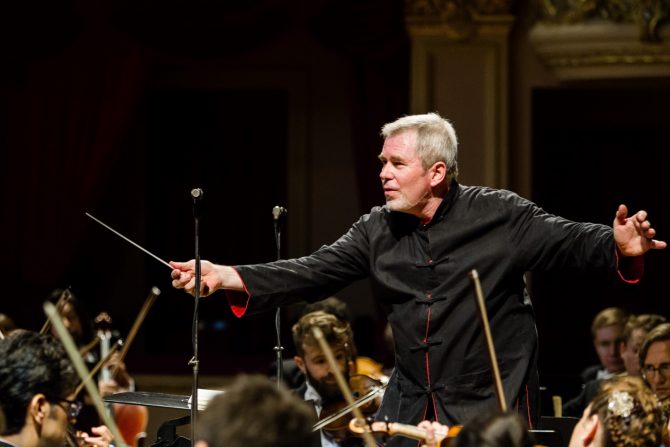 France – Benelux and some countries

Now in his 22h season, Lavard Skou Larsen, founder and leader of the Salzburg Chamber Soloists continues to tour in Europe and in the USA. In the spring of 2013 they were invited to the world’s prestigious New York Metropolitan Museum to perform Haydn’s Seven Last Words, which received a rave review from the top critic, Anthony Tomassini, of the New York Times.

Lavard Skou Larsen, Music Director of three orchestras, has expanded with his leadership its diversified programs and outreach projects, most notably with the Salzburg Chamber Orchestra’s over fifty successful concerts in the USA. Appearing at the Kennedy Center in Washington, DC, the Metropolitan Museum, New York, Cerritos Center in Los Angeles, Wenz Concert Hall by Chicago, and in major concert halls in St. Louis, Denver, Salt Lake City, San Diego, Charlotte, Houston, and Palm Beach, the ensemble was enthusiastically received by the audience and critics alike. Lavard Skou Larsen and the Salzburg Chamber Soloists inspired with their outreach projects for children and young audiences throughout the United States.

As Professor in violin at the prominent Salzburg Mozarteum, Lavard Skou Larsen cultivates the next generation of superb musicians in his studio since 2002. His students came to be soloists and members of top orchestras.

His DVD release of Beethoven’s Coriolan Overture, recorded live from Zug, Switzerland, and the recent CD releases of the Organ Concerti by Handel with the Kammerakademie Neuss, the Shostakovich piano concerti and the Hamlet Suite received highest critical acclaim. The world premiere recording of H. Kaminski’s works for orchestra was released by CPO in 2013. The upcoming recording projects for the same label will be Volume 2 and 3 of the complete Organ Concerti by G.F. Haendel, the last symphonies by Michael Haydn with the Deutsche Kammerakademie and with the Salzburg Chamber Soloists the works for orchestra by J. Bruegge. His relationship with the CPO Label gives him the rare freedom to record with any orchestra and repertoire of his choice.

Lavard Skou Larsen was born 1962 in Porto Alegre, Brazil to a Danish conductor and Brazilian violist. He began violin lessons at age four with his father and already by fourteen he was admitted to the Salzburg Mozarteum to study with Helmut Zehetmair. He received his performance diploma with distinction and completed his postgraduate diploma under Sandor Vegh.  He won the prizes “Concertino Prague” and the “Sergio Lorenzi”, both as soloist and chamber musician. At age twenty he was a member of the Camerata Academia under Sandor Vegh.

His conducting skills developed naturally through the early mentoring by his father Gunnar, and were molded by his inspiration of his role model, maestro Sergio Celibidache, which at age fifteen resulted in the first prize of Austria’s Young Musicians Competition. Already at age 23, he was offered to take charge of the European Union Chamber Orchestra as artistic director and leader.

Equally successful as a violin soloist, Lavard Skou Larsen performed at Vienna’s Konzerthaus, Salzburg’s Mozarteum’ s large concert hall, Beethoven Halle, Bonn, Concertgebouw, Amsterdam, Teatro Colon, Buenos Aires, and on major stages in Paris, Cologne, Frankfurt, Geneva, Switzerland, and Birmingham to name a few. His debut CD was released in 1991 with the Mozart Serenades for Naxos, followed by a Denon Release in 1994 of the Sinfonia Concertante by Mozart, partnering with violinist Boris Belkin and the world premiere recording of the complete violin sonatas by Brazilian composer Camargo M. Guarnieris with pianist Alexander Muellenbach.Lavard Skou Larsen’s dual Nationality and the influence of his education background in Salzburg’s musical tradition, has molded his commitment and passion to music-making for an international diverse audience. His understanding  and the talent to effortlessly work with large symphony orchestras is directly influenced from his profound knowledge and experience as a chamber musician.