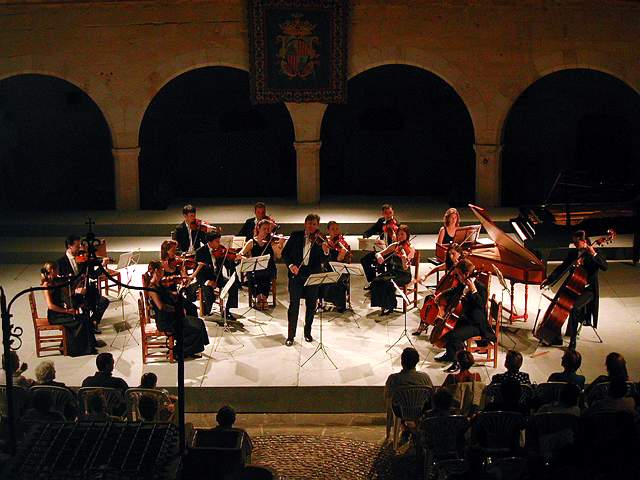 France – Benelux – Spain and other countries

In 1991, the violinist Lavard Skou-Larsen and a handful of colleagues decided to form an unusual ensemble. The aim of this ensemble was to perform orchestral chamber music with the freedom of soloists.

Skou-Larsen combed Europe and the rest of the world until he had a group of first class musicians. Their inspiration was the unforgetable Sandor Végh, whose charisma had influenced many members of the group considerably. In only its first year of existance, the orchestra toured the United States and Canada.

Thanks to the success of the tour, invitations followed to numerous concerts with such celebrities as Boris Belkin, Mischa Maisky, Michel Dalberto, Rodolfo Bonucci, Jean-Bernard Pommier, Giora Feidman or Alexander Lonquich.

From 1992 to 1995, Boris Belkin was Artistic Director of the ensemble. During his tenure, the orchestra released two CDs of Mozarts work.

The Salzburg Chamber Soloists are regular guests at various festivals, including “Academia Chigiana”/Siena, the Turku Musikfestival / Finland, the Mozart Festival/Würzburg, Schubertiade/Roskilde, MIDEM in Cannes and the Salzburger Kulturtage. In 2001, the orchestra was invited to Lebanon to perform the final concert of the “Baalbeck Festival”.

In January 2002, the ensemble toured Germany together with the actress Senta Berger, performing the “8 seasons” with music by Antonio Vivaldi and Astor Piazzolla.

A special event in 2003 was a german tour with Giora Feidman, celebrating jewish Klezmer and argentinian Tango.

With works from Mozart, Mendessohn, Bruckner, Elgar and Bartok the third South America tour was realized in October 2005, with performances in Sao Paulo, Curitiba, Rio de Janeiro, Santiago de Chile, among other places.

In 2006, the 250 years celebrities of Wolfgang Amadeus Mozarts birth, the orchestra held 17 concerts in Salzburg, at the prestigious “Grosser Saal des Mozarteums”, and over 100 concerts worldwide at prestigeous festivals and concert halls in Germany, France, Belgium, Switzerland, Spain, Turkey and Italy.

The Salzburg Chamber Soloists recorded for DENON and actually for Coviello Classics.